Eastern Medicine and Herb Therapy Gets Its Overdue Respect

Eastern Medicine and Herb Therapy Gets Its Overdue Respect

One of the top hospitals in this country, The Cleveland Clinic has opened the door to patients seeking alternative therapies.  Chinese medicines are now being offered to those who have had multiple problems like joint pains and digestive problems for which traditional treatments have not been effective.

Now, after evaluating patients, herbs are being dispensed.  This has been practiced in China and other Eastern countries for centuries but due to a lack of concrete data proving efficacy, it has not yet been made widely available in the U.S.

The herbal clinic, which is part of the Center for Integrative Medicine,opened in January of this year.  The clinic sees patients who have been referred by physicians who will continue to monitor them after herbal supplements have been started to ensure that there are no adverse reactions.  Services also include acupunture, holistic psychotherapy and massage.

“Western medicine does acute care phenomenally.… But we’re still struggling a bit with our chronic-care patients and this fills in that gap and can be used concurrently,” says Melissa Young, an integrative medicine physician at Cleveland Clinic.

Osher  Center for Integrative Medicine at Northwestern University and NorthShore University HealthSystem, affiliated with the University of Chicago,offer herbal medicine and are among the rare herbal clinics open to the public despite the popularity and wide availability of acupuncture programs.

According to the medical director at North Shore’s Integrative Medicine Program,Leslie Mendoza Temple:

“I’m getting more and more physician referrals [for herbal treatments], which to me is a sign of greater acceptance,” says Leslie Mendoza Temple, medical director at NorthShore’s Integrative Medicine Program. “When I first started here we were pounding on doors to prove we’re not crazy and we’re legitimate and safe.” Referrals come from neurology, oncology, gastroenterology and rheumatology, among other departments, she says. 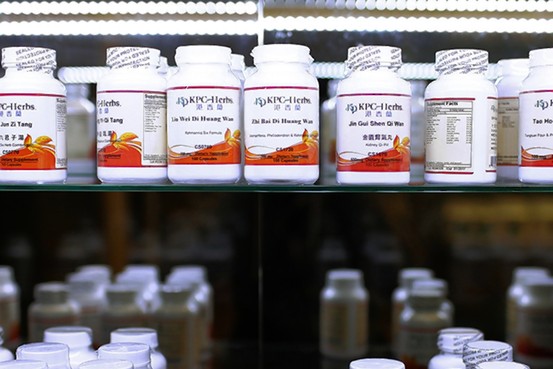 “The evidence base for these approaches using modern rigorous methods of randomized trials is quite thin,” says Josephine Briggs, director of the National Center for Complementary and Alternative Medicine, part of the National Institutes of Health. NCCAM is funding research looking at fundamental biological mechanisms of some herbal products. But they are not currently funding any efficacy studies involving humans. Some research is looking at how herbs may affect drug metabolism.

There are thousands of herbs used in  Chinese medicine. Used in the uneducated hands, herbs can be toxic or have resevere adverse reactions when mixed with traditional medications that are already being used.

Issues of concern include both quality, concentration and potential contamination. At Cleveland Clinic, premade herbal formulas are bought and ordered through KPC Products, a subsidiary of Taiwan’s Kaiser Pharmaceutical Co. Custom-blends are made by Crane Herb Co., based in Massachusetts and California.

At the Cleveland Clinic’s herbal center, liability waivers are given to patients to sign acknowledging that “herbal supplements are not a substitute for a medical diagnosis.They then undergo  a one-hour consultation including both questions regarding social and family health as well as an examination, looking at  the tongue, and the traditional Chinese method for pulse-taking (three fingers on each wrist to check different pulses corresponding to various organ systems).

Conditions that patients have presented to the Cleveland Clinic with include infertility, chronic pain, joint inflammation, anxiety,chronic fatigue,  digestive problems and multiple sclerosis.

Dr. Maged Rizk, a gastroenterologist at Cleveland Clinic  points out that  Chinese herbal medicine is still being critically evaluated. “In the past it wasn’t even considered seriously.  Some of the things we’re doing now aren’t very effective. Should we really be looking at alternatives a little more seriously?’ I think the verdict is still out,” he says.