Nancy Grace- furthers her cause with Murder

Nancy Grace- furthers her cause with Murder 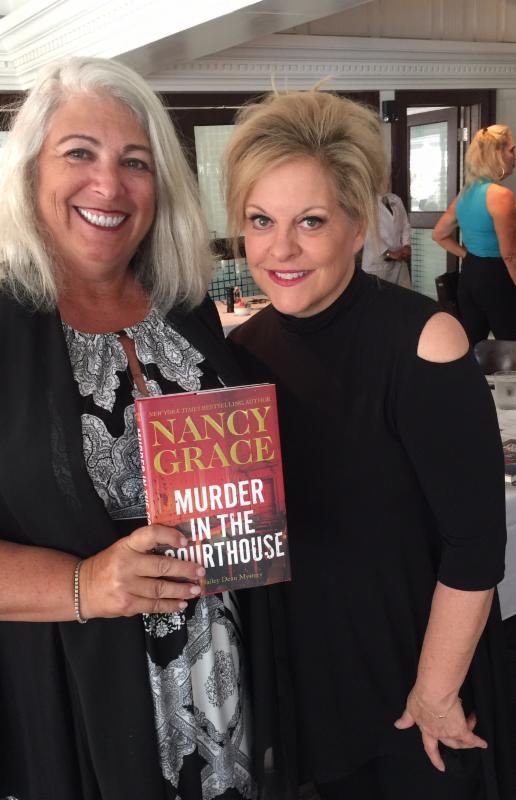 It was fascinating, and engaging to hear Nancy Grace promoting her book and sharing her life story today.

The following is taken from the HLN TV website which she so graciously relayed to us today.

Nancy Grace is television’s only justice themed/interview/debate show, designed for viewers interested in breaking crime news. Grace challenges guests on the most high profile legal issues by drawing her perspective as a former violent crimes prosecutor, a crime victim herself and tireless advocate for victim’s rights.

An outspoken, tireless advocate for victims’ rights and one of television’s most respected legal analysts, Nancy Grace is the powerful force behind HL

Supporting Nancy Grace is also supporting her cause- National Association of Missing and exploited children which she so fervently and tirelessly works for.

Murder in the Courthouse: A Hailey Dean Mystery

Hailey Dean is in trouble again—and this time it could be deadly!

Hailey Dean, the prosecutor who never lost a case, heads to Savannah as an expert witness on the sensational Julie Love-Adams murder trial, but she soon finds herself embroiled in a mystery . . . and an unexpected love affair.

At the baggage claim, Hailey is greeted by the handsome Lieutenant Chase Billings. On their way to her hotel, they hear an APB for a murder that has just been committed. When they race to the scene, they find Alton Turner, a courthouse sheriff known for being as neat as a pin. Only he’s a hot mess now, lying sprawled in a pool of blood, severed in half by a garage door.

Hailey, never one to mind her own business, jump-starts Turner’s murder investigation while juggling the Julie Love trial. The timing of the trial and murder could be a coincidence, but everyone knows there is no such thing as coincidence in criminal law!

Next, Elle Odom, a gorgeous court clerk, is poisoned at the courthouse cafeteria coffee bar. Then, the police tech who helps find Elle’s missing handbag (stuffed with her life-saving Epipen) turns into alligator bait at an amusement park … and that’s just the beginning.

With Lt. Billings falling hard for Hailey, she digs deeper to find a killer with a very  mysterious agenda . . . knowing full well the next murder victim may very well be herself.

Get it at Amazon in either hard copy or kindle version.  Not only is it a good read but you will also be helping out her cause of National

I strongly recommend that you do yourself (and her cause) a favor and purchase this book today!