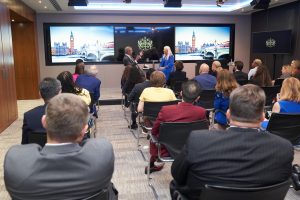 INTERVIEW
Had a wonderful opportunity to interview Nigel Farage- an English politician who was Leader of the UK Independence Party and Leader of the Brexit Party from 2019-2021. BTW-Brexit won!
My questions to him were which of the social media platforms does he like the most and does he do his own posting.
His answer- Instagram is his fave and he does most of his posting but he does outsource some and has his social media “buddy” view his posts at times before hitting the publish button to ensure its “PC” nature.
Bet Trump wishes that he had a buddy like that for his Twitter account!
QUESTION
If you could ask Nigel Farage anything, what would it be?
Dr Barbara Hales2021-09-25T16:27:42+00:00